Background information:
Many academic and behavior issues have at their core the incomplete progression of childhood reflexes. These reflexes should each emerge in the child’s system, become fully developed and useful as a neural pattern, and then integrate as the trigger for it simply falls away. Then the use of the pattern can be a choice, rather than an inevitable reaction. Early trauma can cause the orderly progression of infant reflexes to go into a “holding pattern,” resulting in a wide variety of emotional, physical, and academic challenges. Fortunately, these reflex challenges resolve quickly and effectively when addressed through specific Brain Gym processes. For more background information, please see the links at the end of this article.

If the concept of infant reflexes is new to you, I invite you to click here to read my previous post, which is an overview of this important topic.

What follows is an updated version of an article that originally appeared in my Notes From Center Edge newsletter.

Balancing to Resolve Fear Paralysis Reflex
and Its Effects on Learning, Behavior, and Performance

The Fear Paralysis Reflex is the key to all other reflexes. It is the first reflex to manifest. Indeed, the Fear Paralysis reflex is intended to emerge, develop, and integrate (so the former trigger no longer elicits a reflexive response) all in utero, long before birth.

If the Fear Paralysis Reflex (FPR) does not follow the intended route of development, the child’s (or adult’s) system is left locked in a fear state that permeates all waking and sleep activity. If Fear Paralysis is still active all situations are seen through a filter of fear.

A list of behaviors that may manifest due to lack of resolution of Fear Paralysis Reflex is as follows:
• low tolerance to stress
• anxiety seemingly unrelated to reality
• hypersensitivity to touch, sound, specific frequencies of sound, changes in visual field.
• Dislike of change or surprise/poor adaptability
• Fatigue
• Elective mutism - the persistent failure to speak in specific situations where speaking is expected, despite the ability to speak otherwise
• Holding breath
• Fear of social embarrassment
• Insecure. Lack of trust in oneself.
• May become socially isolated and withdrawn.
• Overly clingy or may be unable to accept or demonstrate affection easily
• Fear of school
• Compulsive traits/OCD
• Negativism, defeatist attitude
• Won’t try new activities, especially where comparison occurs or excellence is expected
• Depression
• Temper tantrums
• Controlling or oppositional behavior, especially at home
• Immediate motor paralysis under stress - can’t think and move at the same time
• Reduced muscle tone
• Eating disorders
• Craves attention
• Aggressive behavior borne out of frustration and confusion
• Poor balance

Children or adults with FPR still “on” in their system will typically manifest a cluster of these behaviors – the more fully the reflex manifests, the more pronounced the behaviors will be, and the more severe the implications in their life.

Like all reflex issues, Fear Paralysis Reflex often responds quickly and easily to the Brain Gym balance process. Once identified and addressed, rapid, permanent change may be experienced.

Here are the stories of a few of my own clients with whom I have addressed Fear Paralysis Reflex.

• A recent client, a very capable woman with a flourishing business, recently came for a balance regarding her fear of being home alone. It became evident during her session that resolving Fear Paralysis was called for. The session had excellent results, and I got a call from her a few days later and learned that she was now completely comfortable at home alone, and none of her old fear remained. A few weeks later I heard from her again. She had just come back from a ski weekend in Utah. Previously she had stuck to the easiest slopes, but this time she thought, “Why canʼt I go down these other slopes? They look like a lot more fun!”

She found herself skiing enthusiastically and joyfully, truly “throwing herself into it.” That night back at the ski lodge she realized what sheʼd done, and thought immediately of her balance for Fear Paralysis. While she had taken appropriate precautions to remain safe, there had been no feeling of fear the entire day.

• Another client brought her daughter, Jana, age thirteen, to deal with some very challenging issues. Jana was simply unable to be away from her mother. She could tolerate her mother going to work if she herself was at school, but was unable to wait at the bus stop in the morning without her mother waiting in the car until the bus got there. Her mother could go nowhere in the evenings or on weekends without Jana.

After a series of doctors diagnosed Jana as simply ADD, her parents tried a variety of alternative treatment methods, including hypnosis. Nothing had any effect. Janaʼs balance session focused on being able to be anywhere, regardless of where her mother was. The specific process that was called for here was a balance to resolve the Fear Paralysis Reflex.

At the end of the balance Jana reported feeling “really different... and good!” And her trip to church camp the next weekend, where she waved goodbye to her mother and never gave her another thought the entire time, was a great experience.

A few weeks later she turned to her mother and said, “Mom, school is only two miles away. Canʼt I just ride my bike there every day?”

• Another client, Ron, would always jump at unexpected noises. A career police officer, heʼd always dreaded his yearly visit to the shooting range to maintain his marksman rating. Now retired, even the sound of the phone ringing next to him caused him to jump. Having had two heart bypass surgeries, he decided it was time to do something about his extreme reactions.

His balance session called for resolving Fear Paralysis Reflex. Immediately following his first session Ron reported that he no longer jumped at the sound of the phone. He said, “I find myself just turning my head and thinking, ʻOh, the phone is ringing.ʼ Before that youʼd have had to peel me off the ceiling.”[1]

Not long after, Ron and his wife were out for the evening with two other couples, and they enjoyed dancing all evening. Ron told me, “Iʼd always hated dancing — you couldnʼt make me dance in public. I always worried what people were thinking about how I danced. This time I just didnʼt care what anybody thought — and you know what? I had a great time!”

As you can see from each of these client stories, when you resolve the Fear Paralysis Reflex, you resolve a lot more than the issue that might have prompted you to come for the session in the first place. Youʼre resolving the tendency toward fear itself.

What does it take to resolve a reflex?
As I mentioned earlier, each reflex must fully emerge, develop, and then become integrated into the overall neural system. On occasion, if manifesting in a mild form, all three stages may actually be resolved in a single balance session.

More typically, especially when the reflex seems to be strongly “on,” it will take a short series of sessions for each reflex to be completely resolved. 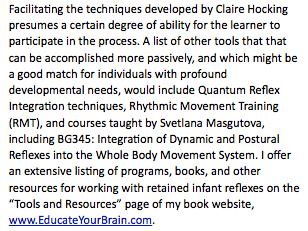 Especially if you or your child are dealing with severe learning or performance challenges, you will want to see what other reflexes have been compromised. In my experience, if Fear Paralysis Reflex is still strongly “on,” other reflexes are, as well. And each reflex creates its own unique strain on the system, producing its own array of learning and performance challenges.

Click here to read a past (June 2013) blog posting, which illustrates the specific steps I used in a balance that included addressing Fear Paralysis Reflex with a young client.

As you approach resolving each of these reflexes, itʼs important to move slowly. It can take at least two weeks for each balance session to integrate into the mind-body system. Sessions held too close together could be counter-productive, as time needs to be allowed for the neurology to mature.

Amazing results are seen in both children and adults with a wide variety of challenges, when reflexes are addressed over time. Claire Hocking, who pioneered addressing reflex issues in this way through a special modification of the Brain Gym balance process, has had remarkable results, from those who are extremely learning-disabled, developmentally delayed or autistic. Many of the originally “hopeless” learning-disabled children that Claire has worked with over time are now excelling in college.

At a recent training for Brain Gym consultants she told of her work with a young girl diagnosed as having Aspergerʼs Syndrome (part of the autism spectrum). After a few sessions to resolve the girlʼs Fear Paralysis Reflex, the doctors actually had to re-categorize the girl as “normal, with occasional and mild Aspergerʼs behaviors.”

We all have various reflex issues, acting as the invisible puppeteers pulling us this way and that. Of the fourteen Brain Gym consultants who gathered for Claire Hockingʼs recent course almost all had Fear Paralysis “on” to one degree or another. Who knows what changes will manifest in the lives of all those people who are no longer subject to this invisible pull?

Resolving Fear Paralysis Reflex is a powerful step in creating true inner ease. It may be the step your mind-body system has been waiting for your entire lifetime.

If you'd like to learn Claire Hocking's system for integrating infant reflexes, I'm happy to share that she's authorized me to teach it. Follow this link to my Courses Page, where you can learn about the next opportunity to participate. I also travel to teach this course in other locations.

• To learn more about how reflex continuum delays may manifest in children and adults, as well as interim management and coping strategies, I highly recommend the book Learning, Reflexes and Behavior: A Window Into the Child’s Mind, by Sally Goddard.
• Chapter Eight of my own book, Educate Your Brain, is an overview of infant reflexes.
• These links will take you to articles on my blog and past articles from my newsletter, all pertaining to infant reflexes.
http://www.wholebrainliving.com/2015/12/understanding-retained-infant-reflexes.html
http://www.wholebrainliving.com/2014/04/steering-clear-for-bicycle-safety.html
http://www.wholebrainliving.com/2013/06/fear-paralysis-reflex-and-baseball.html
http://centeredge.com/ArticPDF/Resolving_Spinal_Galant_Reflex.pdf
http://centeredge.com/ArticPDF/Moro.pdf
http://centeredge.com/ArticPDF/Symmetrical_Tonic_Neck_Reflex.pdf

My very best to you all,
Kathy
1. While this "jumping at noises" is more like a Moro Reflex (startle) response, Ron's mind-body system chose Fear Paralysis Reflex to resolve. These two reflexes are strongly associated; indeed, Moro follows FPR, and the fetus's Moro movements in utero may be part of what helps to integrate the FPR itself. In Ron's balance, his learning menu for resolving Fear Paralysis Reflex included actually doing the Moro "startle" movement, which is one of the developmental activities that is on Claire's list for helping to resolve FPR. We didn't precheck to see if Moro was an issue for Ron, but my educated guess is that this one balance may (remarkably) have resolved both reflexes.

Please share your thoughts!
If you don't see a comment space below,
please click here to view this article as a separate page,
and scroll down. Thanks!
Posted by Whole-Brain Living and Learning at 7:44 PM