Eight year old “Mark” arrived for his second Brain Gym® session with an enthusiastic report: reading and writing were much easier since his first session, three weeks prior.

Mark had been diagnosed with “dyslexia and dysgraphia,” and, despite his clear intelligence and precocious verbal language skills, had struggled in school. Now, following his first Brain Gym session (which had included Dennison Laterality Repatterning), he found that he could read much more easily, and understand what he read. His handwriting had definitely improved, as well. Mark and I shared a high-five to celebrate these changes!

When I asked Mark what he’d like to work on now, he said that he was still “kind of confusing d’s and b’s” in both reading and writing. He said he could mostly figure them out, but he wanted to know them “instantly.”

To create a pre-check for this goal, I pulled out my small whiteboard and wrote d’s and b’s all over it. I pointed to one letter after another, in random order. Mark correctly identified each one, but his face was stressed and it looked like he was barely breathing, signs that a lot of effort was going into this activity.

Reversals
Making reversals like this is common among young children, most of whom grow out of it as they mature. When reversals persist into a child’s school years, it could indicate that certain kinds of patterning were not complete, perhaps the outcome of not going through the crawling stage, or not actually crawling-on-the-floor frequently enough, and with sufficient duration.

Crawling is a significant process that helps to pattern the child’s brain for fluidly using both hemispheres together. Without this kind of patterning, we may struggle to perceive the difference between such things as b and d, or p and q, or 3 and E.

Indeed, I had learned from Mark’s mother that he had skipped the crawling stage. When he began his first Brain Gym session, he had great difficulty with the Cross Crawl movement, where we raise one knee and reach over to connect the opposite elbow to it; then the other knee with its opposite elbow, etc., back and forth (requiring cooperation between our two brain hemispheres). It was much easier for Mark to bring his elbow down to his “same-side” knee, rather than crossing over to the opposite knee.

By the end of that first session (which, as I mentioned, included Dennison Laterality Repatterning), he could easily and automatically reach for the opposite knee. Immediately, his reading showed a dramatic improvement. He was reading easily, with expression.

Back to today’s session…
This time, Mark’s learning menu started out with doing the Lazy 8s. This is an activity that calls on both the right and left hemispheres simultaneously, and requires the learner to “cross the midline.” 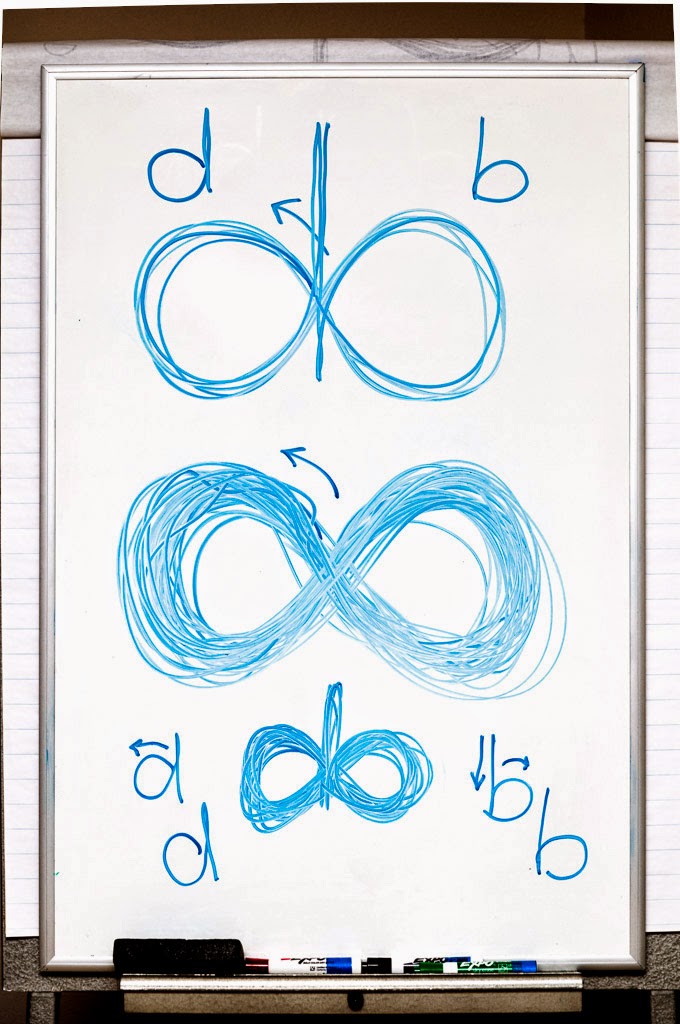 I made a sample Lazy 8 on my big whiteboard and asked Mark to begin tracing over it, until he felt “done.” This took quite a few repetitions, as his mind-body system was absorbing this pattern. When he felt finished, I asked him to switch the marker to his other hand, and do the same thing. With his non-dominant hand, he was less coordinated, and it took longer for him to feel like he had the flow of the Lazy 8. Then I asked him to hold the marker with both hands, and again trace the 8. He took some time with this activity, as well.

This method of blending letters of the alphabet into the Lazy 8s pattern is called “Alphabet 8s.”[1] 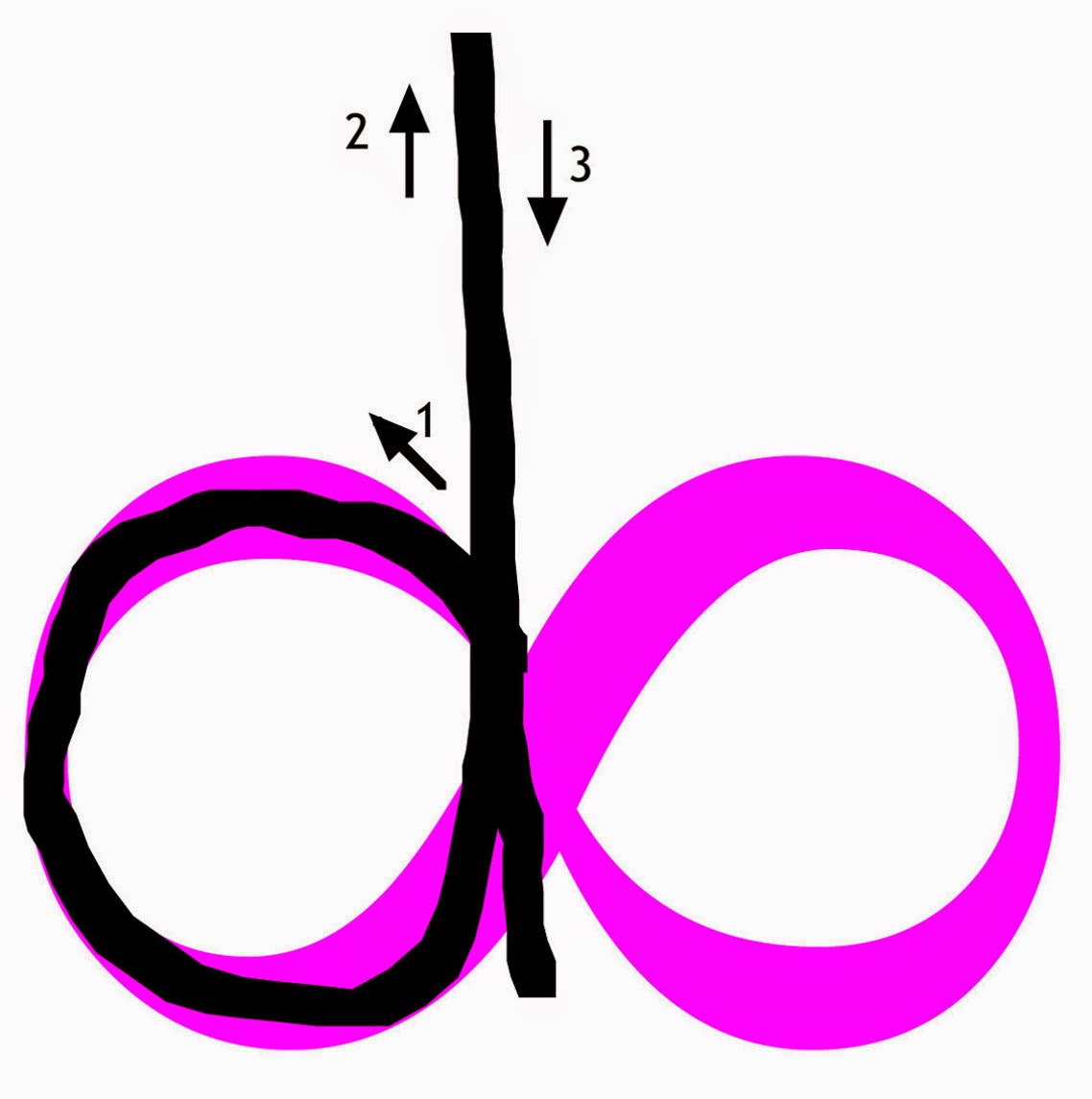 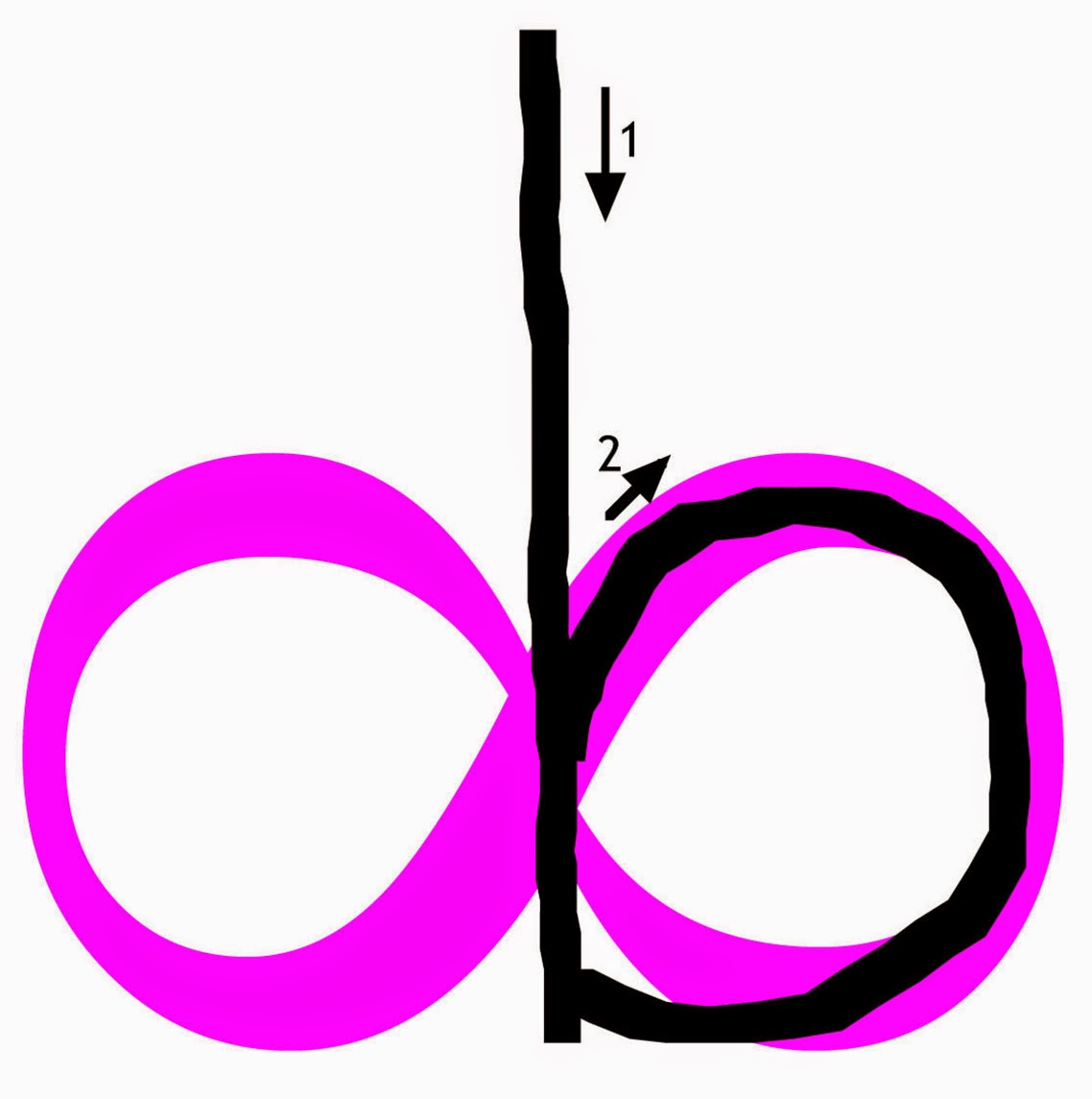 The letter d begins with a curve up to the left, around, then a straight line up and down.

The letter b begins with a downstroke, then a curve up to the right and around.


When Mark felt finished with his Alphabet 8s, he said he was ready to repeat his precheck. This time, when I pointed to each of the letters – d or b in random order – he not only immediately knew each one, but he supplied his answers breathing easily, and with a smile on his face.

Mark may have fully balanced for his entire goal of reading easily, or he may still have other aspects to resolve. Time will tell. But I love knowing that, if he identifies new areas where he'd like to improve, we can address them with Brain Gym balancing!

Warm regards,
Kathy
[1] The Alphabet 8s activity includes patterns for all 26 letters of the alphabet. For more information about Alphabet 8s you can refer to Brain Gym® Teacher’s Edition, by Paul and Gail Dennison.

Please post your comments!
If you see a comment space below, please enter your thoughts there.
Otherwise, click here to access this article as a separate page,
and scroll down. Thanks!
Posted by Whole-Brain Living and Learning at 8:33 PM