Learning as a Force of Nature

I was incredibly privileged today: I got to watch learning happen.

Lara, eight years old, had arrived at my office for her second Brain Gym® session, this time choosing to improve her handwriting. She said it was “hard” and she was “too slow” in her writing.

Throughout the 23 years I taught elementary school, I would remind children again and again about proper handwriting, and yet certain letter formation and spacing habits persisted. Now that I have almost 15 years of experience as an Edu-K instructor, there's one thing I know for sure: children cannot achieve any kind of alignment in their writing that they cannot experience in their body. How would Lara choose to experience internal alignment today?

I invited Lara to select activities from the big Brain Gym movement menu hanging on the wall of my office. First she chose the Thinking Cap, then Space Buttons, and finally Lazy 8s. It was at this point that I observed something truly remarkable.

Lara had never experienced the Lazy 8s activity before. I drew a sample Lazy 8 on the whiteboard at about her eye level, and handed her the marker, which she took up with her right hand. She began tracing the Lazy 8 over and over – slowly at first, and then with tremendous focus and drive.

Before I go any further with this story, let me back up and explain something about the Lazy 8s activity and its specific pattern.

Typical Brain Gym practice is to begin the Lazy 8 in an "up the middle" direction, starting at the center and flowing initially up and around to the left, then up and around to the right. This movement pattern helps us practice the direction of flow of the circular letters that we write: a, b, c, d, g, etc. (See pages 32-33 of Brain Gym® Teacher’s Edition for instructions on the Lazy 8s activity, and pages 36-37 for Alphabet 8s. Here’s a letter “a” in its place on the Lazy 8, as an example.)

Paul Dennison, Ph.D., co-creator of the Brain Gym program, has also explained that learners who are still exploring their sense of body and grounding will often choose to do their Lazy 8s in the "down the middle" direction.1 In my experience, children will not become truly fluid at the “up the middle” Lazy 8s pattern (and therefore correct letter formation) until they are integrated for the “down the middle” pattern, and the accompanying sense of personal grounding. (You may want to check out this link for an article I wrote for the Edu-K Update, about this whole topic, “Refining Lazy 8s." This article also exists as “Appendix E" in my book, Educate Your Brain.)

Now back to Lara, at the whiteboard:

Lara had the marker in her hand, tracing her Lazy 8s over and over “up the middle,” with amazing focus and concentration. Then she made a rapid reversal of flow and began drawing them flowing “down the middle.” Then she reversed direction again - and then again. She must have done a good 40 tracings of the Lazy 8, switching back and forth between “up the middle” and “down the middle” after every four or five tracings. Very unusual!

When she finally slowed down and paused, I invited her to switch the marker to her other hand, and she repeated this same process. With great concentration, she flew through the Lazy 8 pattern again and again, reversing the direction of flow again and again.

Finally, holding the marker with both hands, she repeated this same process. She again flew through her 8s with total concentration, faster and faster, repeatedly reversing direction. 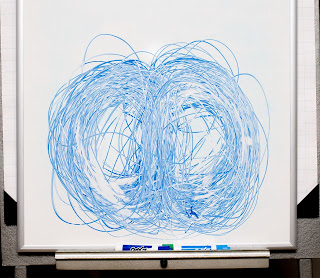 When she was done, the evidence of tremendous learning was left behind on my whiteboard. This may look like a Lazy 8s scribble, but as I watched Lara create it, I must say I was in awe: in that moment I knew I was observing learning taking place on a very deep level. Right before my eyes, she was absorbing a pattern – one that I expect would help her to write more easily (and do many other things more easily as well) for decades to come.

… The truth is, I watch learning happening every day in my Brain Gym practice, as clients experience new ways to accomplish their goals with ease and grace. Large and small aspects of learning are happening all the time as we take on new patterns and abilities through the balance process. But it's not often that learning involves so intense and obvious a period of "absorbing a pattern."

Watching Lara in those moments had been like watching a force of nature at work. And, indeed, I believe that’s what true learning is: an innate force of nature. When the opportunity presents itself to take on a pattern our mind-body system has been crying out for, perhaps for years, we can become intensely immersed in such an activity, in just this way.

Lara finally said she was finished with her Lazy 8s, and was ready to return to her writing. She picked up her pencil and wrote her sentence with clarity and flow. Her letter and word spacings showed considerable improvement. We paused and chatted a moment, then I suggested she write her sentence again. This time, her letter and word spacings were correct, and all her letters were clearly based on the line. She perceived one small error, and tidily fixed it. I was also impressed with the confidence with which she now held her pencil, and the ease of each stroke as she formed each letter.

We celebrated her new ability and confidence, and she happily departed with her parents, leaving me wondering: What kind of interior change had Lara undergone in these few minutes?

Enhanced spatial awareness (the two sides of the Lazy 8 are symmetrical and mirror-image to each other) and a newfound sense of grounding are just the beginning of what she may be experiencing. These are an important foundation for handwriting: letter formation and direction of flow, proportion, spacing, and letters firmly established on the line.

Yet this foundation will support her far beyond handwriting. Now that she had this symmetrical, grounded pattern "in her body," what other opportunities are now open for her?

Please share your comments, or your own experience of Lazy 8s!

Brain Gym® is a registered trademark of Brain Gym® International • www.braingym.org
Copyright © Kathy Brown 2013. All rights reserved.
Post a Comment
Posted by Whole-Brain Living and Learning at 11:30 AM